Charles, 2nd Earl Grey, is famous for (a) being the architect of the Great Reform Act of 1832, (b) a blend of tea, and (c) having a thumping great monument in his honour slap-bang in the middle of Newcastle. He lived from 1764 to 1845, his ancestral home being Howick Hall on the Northumberland coast.

As prime minister during 1830-34, he oversaw the passing of perhaps the most famous act in British parliamentary history, when his Whig government saw off stiff opposition from the Duke of Wellington to effect the passing of the Great Reform Act. To say nothing of the Abolition of Slavery Act a few months later.

As a tea enthusiast, he received his special blend as a gift from a Chinese mandarin to suit the water from the well at Howick, using the oil from bergamot orange rind to offset the taste of the lime in the water. Lady Grey used the tipple in London when entertaining, and it proved so popular that she was asked if it could be sold to others – which is how it came to be sold worldwide. The Greys, however, failed to properly protect their ‘invention’ and did not make a penny from the tea's astonishing success.

As for Grey’s Monument in Newcastle, this was raised in his honour in 1838, and it still stands to this day, proudly dominating the cityscape at the head of Grey Street – itself recognised as one of the finest thoroughfares in the country.

Grey spent much of his life at Howick Hall, including the last 45 consecutive years of his eventful existence. The beautiful gardens are today open to the public (the hall is closed for the time being); but perhaps the most curious of Grey’s legacies is a little building which lies about a mile to the east of the hall on the very edge of the sea. Constructed in the seventeenth century and altered in Earl Grey’s heyday, The Bathing House was used by the Earl, his wife and their 15 children as a private changing room for their lazy days by the sea. Stone steps were cut into the rocks leading down to a quarried-out rock-pool and private beach. It is now used as a holiday cottage. 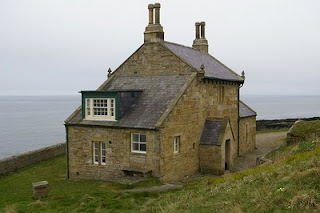 © Copyright Phil Champion and licensed for reuse under this Creative Commons Licence
Posted by HistoryMick at 11:00