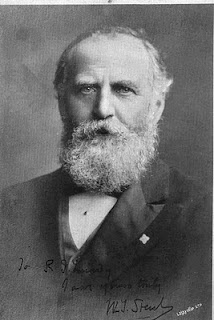 William Thomas Stead (above) is generally regarded as the father of modern journalism – and, many say, of all its ills. He wrote widely, profusely and usually in a sensationalist manner. He was also a native of Embleton, Northumberland.

The son of a Congregational minister, W T Stead was born in the summer of 1849. He lived for a time in Howdon-on-Tyne and was schooled in Wakefield, then found himself back in the North-East as an apprentice in a Newcastle merchant’s office. Quickly branching out into journalism, he worked for some time as editor of the Northern Echo, before advancing to London’s Pall Mall Gazette – becoming its editor in 1883. During his six-year tenure he made quite an impact in journalistic (and political) circles, where he developed his characteristic investigative style and championed the use of the interview. He was often accused of ‘creating’ the news rather than reporting it.

From 1885, he threw his weight behind the campaign against child prostitution; his ‘staging’ of the purchase of a young girl from her mother landing him a jail sentence. The great ‘Crawford Scandal’ of 1886 also attracted his attention. In the 1890s he turned his mind to many new and different spheres of writing during an enthusiastic period of reforming vigour. He was a pacifist, a psychic researcher and a great visionary – his reforming ideas and ideals often years ahead of their time. He claimed to be in contact with the spirit world, and was said to have hinted at the mode of his death on several occasions.

The nature of his demise – aboard the Titanic in 1912 – was typical of the man. He was on his way to a peace conference in the US when the iceberg struck, and Stead dutifully helped several women and children into lifeboats. He then retired to the 1st Class Smoking Room where he settled down with a book, no doubt mindful of his deathly premonitions. A later sighting has him clinging to a raft with John Jacob Astor IV, the wealthiest man on the ship, the pair of them relinquishing their grips after they became frozen, Leonardo DiCaprio-style. His body was never recovered.

It was widely rumoured that he was due to be awarded the Nobel Peace Prize for his pacifist work, until his fateful trip intervened.
Posted by HistoryMick at 14:01