In the narrow gap between Berwick-upon-Tweed and the Scottish border lies the site of the Battle of Halidon Hill. Fought between the armies of England and Scotland on 19th July 1333, it was the first battle of the so-called Second War of Scottish Independence. After the Treaty of Northampton had brought the first series of conflicts to a shaky end in 1328, Scottish-held Berwick soon found itself under siege by the English in the spring of 1333 as diplomatic relations deteriorated once again.

Ensuing negotiations betwixt the two nations left Berwick as the agreed prize in a straight fight between the respective circling armies of England’s King Edward III and the Scots under Sir Archibald Douglas, the ‘Guardian of the Realm’. The English ensconced themselves upon Halidon Hill, a modest 530ft prominence two miles north-west of Berwick, and awaited the approach of the enemy.

The Scots advanced on the English position from Duns to the north-west, across a muddy hollow; here they were caught in fierce archer crossfire from both flanks, and left with little choice but to plough slowly onward and upward towards the bristling English ranks. Though they reached the English line, the Scots were soon scrambling around for cover – and many fled for their lives in retreat, with the English cavalry in bloody pursuit. Though the Highlander division fought to the death, the Scottish defeat was complete, with several thousand casualties. King Edward, on the other hand, lost no more than few dozen men – and Berwick reverted back into English hands.

The Battle of Halidon Hill was seen as English revenge for Bannockburn in 1314. Edward III, though, failed to drive his advantage home in the years thereafter, and the Wars raged on for several decades more. 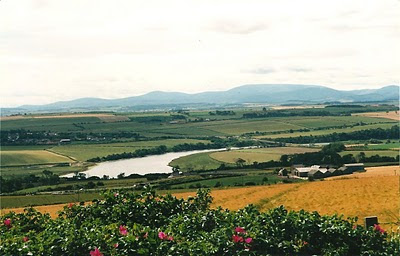 View from the site of the Battle of Halidon Hill, looking south(-ish). The River Tweed and the Cheviot Hills make it into the frame.