The vast expanse of sand and mudflats which can be seen at Goswick Sands north-west of Holy Island contain a dark and dangerous secret. Well, I say “secret”, but there are plenty of signs around to warn you… 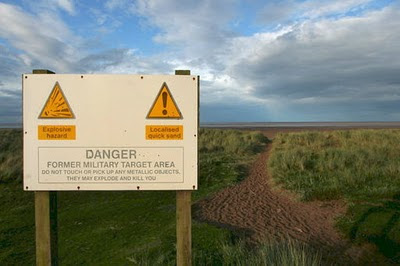 This is only a problem at low tide, of course, but it is worth bearing in mind when your dog starts digging around thereabouts; and is especially relevant should your walking stick alight on something metallic as you pick your way through the marram grass in an otherwise carefree manner. For Goswick Sands can be a volatile stretch of coastline.

During World War II, when rookie bombing crews needed a bit of practice before the real thing, the RAF sent many of them to this remote corner of the country to hone their skills. Countless explosive devices were dropped, including a good many that somewhat inconveniently decided to bury themselves in the sand and remain undetonated. This was the least of our worries back in the early 1940s, of course, but it has caused some concern since.

Since 1945, the RAF has periodically returned to the site to effect a bit of clearance work, and since 1995 has maintained a permanent presence there. In 2005, two 500lb bombs were exposed during a storm, and the resultant controlled detonation could be heard in Berwick, some ten miles distant. Then, in 2009, a total of seven devices were disposed of in similarly spectacular fashion in front of crowds of excited spectators. The government is currently considering pulling the plug on the full-time bomb disposal team as financial cuts take precedence over the public’s safety.

Experts assure us, however, that it is virtually impossible to blow yourselves to smithereens at Goswick, unless you are minded to venture out onto the sands with a JCB. The signs, however, paint a more worrying picture.