Shoresdean, an unremarkable housing estate some 5miles SW of Berwick, bears a history of little antiquity. A somewhat isolated spot for a coal mine, this little settlement nevertheless had one from the 19th century; and the cluster of houses which stand a little to the north of the old mine works are no more than a few decades old. However, the hamlet is famous as being the place where the famous ‘Piper of Loos’ passed away.

Daniel Laidlaw was born at Little Swinton, Berwickshire, in 1875. Joining the Army in 1896, he found himself in the 7th Battalion of The King’s Own Scottish Borderers on the outbreak of World War I. He and his comrades arrived in France in 1915 and by September were in the front line near Loos. On the morning of the 25th they were preparing for their first foray ‘over the top’.

At 6.30am, and under heavy German artillery fire as well as clouds of swirling gas (fired by the British but blowing confusedly back over their own lines), Laidlaw and his colleagues launched into battle. With chaos reigning, the commanding officer ordered Piper Laidlaw to “pipe them together”, which our man duly did by climbing into full view of the enemy and charging his pipes. To the tune of Blue Bonnets O’er the Border, the 7th Battalion rallied and rushed toward the German trenches.

Laidlaw continued playing with complete disregard for his own safety until, falling, wounded, just short of the enemy line as his fellow soldiers won the day. For his “conspicuous bravery” Laidlaw was recommended for, and awarded, the Victoria Cross – as well as the French ‘Croix de Guerre’, whose troops had been similarly inspired in neighbouring trenches by his actions.

Our hero survived the War, lived a full life, and eventually died at Shoresdean in June 1950, aged 74. Hundreds of mourners from all over the country attended his funeral. He lies buried in Norham churchyard, where a headstone was placed over his grave in 2002. 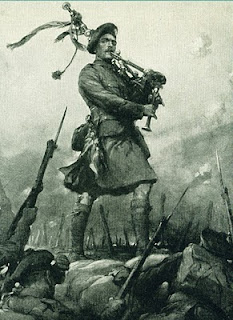 Our man, plus a little artistic licence