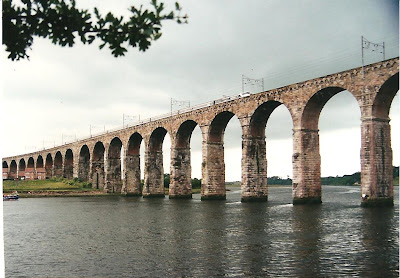 It’s a beauty, isn’t it? And a big ’un, to boot. It’s Berwick-upon-Tweed’s magnificent Royal Border Bridge, of course – the undoubted star of the East Coast London-Edinburgh rail line.

Begun in 1847, it was the very last section of the famous old route to be completed, being opened by Queen Victoria herself, no less, some three years later on 29th August 1850. Though the celebrated railway engineer, Robert Stephenson, claimed the glory for its design, he was little more than a figurehead in reality. Assistant engineer, Thomas Harrison, and resident engineer, George Barclay-Bruce, did most of the donkey-work – with contractors McKay and Blackstock responsible for pulling off the building feat itself to such aesthetic perfection.

And the construction process must have been a tricky one. The bridge was completed later than the rail line itself, the stone viaduct being built around and from within a temporary wooden affair. The foundations were driven down through some 12m of gravel to the bedrock using a state-of-the-art Nasmyth steam-powered pile-driver; and the stone piers – framing 28 giant arches – pushed the viaduct up to a dizzy 38m above the River Tweed. The bridge stretches a lengthy 658m (just over 0.4mile), and was later modified, width-wise, to accommodate an extra rail track. It is now a Grade I listed building.

No such protection was offered to old Berwick Castle, however, during those thrusting Victorian days. For the already ruinous landmark was pretty much obliterated during clearance work for the bridgehead and station, masonry being thoughtlessly and enthusiastically recycled during the bridge’s construction. It is thought that the very spot where King Edward I took oaths of allegiance from the Scots in 1296 lies beneath the present-day station platforms.