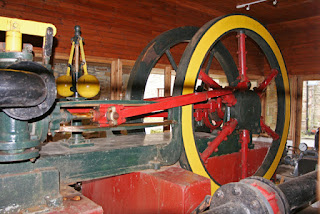 © Copyright Helen Wilkinson and licensed for
reuse under this Creative Commons Licence.


The chief attraction of Allenheads Heritage Centre is the recently restored Armstrong Hydraulic Engine, pictured above – or, to give it its full title, the ‘W.G.Armstrong twin cylinder, double acting hydraulic engine’. It was made and supplied by the famous industrialist for his friend, the almost as well-known Thomas Sopwith, who at the time was agent of the town’s lead mine.

The water-powered mechanism was one of several that ran machinery in the mine’s yard, primarily the saw-mill and the ore crusher. Installed in the 1840s*, it was fed by Spring House and East End reservoirs high in the hills above the town – and remained in service, remarkably, until 1960. After lying unused and then derelict for a couple of decades, it was rediscovered in 1986 and subsequently restored to full working order.

It is believed to be the last remaining engine of its kind in the world.

* The installation date of the engine does not seem to be precisely known. Some sources give this as early as 1846, but as Armstrong’s mighty Elswick Works in Newcastle were not founded until 1847, this seems unlikely. Sopwith’s diary entries for 1856 indicate that Armstrong’s ‘hydraulic machines’ had by then been up and running for some time.