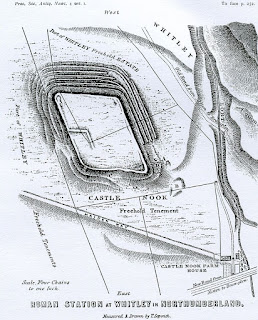 Whitley Castle, as drawn by Thomas Sopwith in
The Roman Wall by John Collingwood
Bruce, (1853). North is to the right!


Whitley Castle Roman Fort – or, more properly, Epiacum – lies on the Northumberland side of the county border with Cumbria a couple of miles NW of Alston. It is, of course, one of many such Roman remains scattered across the North-East, but this one is rather special in two ways.

Firstly, it is lozenge-shaped, as opposed to the standard playing-card set-up. This is due to the lie of the land hereabouts – a 1,050-ft high remote spot in the foothills of the Pennines – and the distorted ground plan is accentuated by the similarly skewed layout of the internal buildings. Its potted history is a familiar one: Iron Age site, followed by a Roman camp, then a full-blown fort c.120AD. There appear to have been rebuilds in c.200AD, then again around 300AD.

Its shape is, we think, unique in the Roman world. Additionally, it has the most complex system of defensive earthworks of any known fort in the Empire – an astonishing claim to fame. There are multiple banks, ditches and folds in the landscape outside the stone ramparts of the fort itself – it being suggested that the main purpose of the stronghold was to control and protect lead and silver mining in the area.

Despite its rather special features the fort has never been fully excavated and to this day lies largely undisturbed under permanent pasture. It is perhaps the greatest archaeological monument in the north of England yet to be uncovered.

Oh, and one other (quite) special thing: it is the highest stone-built Roman fort in Britain…