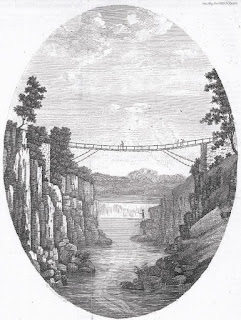 Near the sequence of waterfalls known as Low Force in Teesdale can be found the present-day incarnation of Wynch (or Winch) Bridge – a shaky-looking suspension affair over a particularly ravinous stretch of the River Tees.

The wobbly crossing of today is at least the third version of its kind to have occupied the site. When the first such contraption was thrown across the gorge it was said to have been England’s first chain suspension bridge – and the second in Europe. This was in 1741, and was built to facilitate the movement of the Holwick leadminers from south of the river (old Yorkshire) to their place of work at Little Eggleshope in County Durham on the north bank. Apparently, it only had one handrail and was suspended on hand-forged wrought iron chains – and at 70ft in length and 20ft above the raging torrent, it must have been something of a leap of faith for the individuals concerned. This first bridge was washed away in the Great Flood of 1771, but was replaced by an only slightly more robust-looking second bridge (this time with two handrails). You’ll not be surprised to learn that this one, too, fell apart in 1802, imperilling the lives of several poor souls who happened to be on board at the time. It was a miracle that only one of them was killed.

It was patched up and eventually rebuilt again (a little further upstream) in 1830 to pretty much its current design and appearance, with the double handrails and timber platform suspended from iron chains secured to the banks over cast iron columns. It was strengthened further in 1992 … but still wobbles a lot.

Note: The old image above greatly exaggerates the height of the bridge above the river.