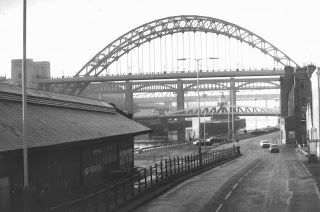 One from the archives: the (& other bridges!)
from the Milk Market, as photographed by the
author in 1984.

Constructed during 1925-28 and opened on , the which spans the gorge between and is undoubtedly Tyneside’s greatest landmark. It was on the drawing board for more than 60 years before the councils of the two towns pushed through their final plans – the design being by Mott, Hay and Anderson (architect R.Burns Dick), and the contractors Dorman, Long & Co. of Middlesbrough.

The three-year construction programme cost some £1.2million and the life of a single worker (Charles Tosh). Its distinctive form made it an instant hit, and it has remained so ever since – and it was the largest single span bridge in the country at the time of its unveiling.

It is commonly believed that the Tyne Bridge was the model for the much larger Sydney Harbour Bridge, but this is not so. ’s bridge was actually begun first (in 1923), but completed much later (in 1932). The only obvious link between the two structures is the identity of the constructors, Dorman, Long & Co. – which is possibly where the common confusion arose. If anything, because of the respective timelines, the was a model for the !

In actual fact, the bridges don’t really resemble one another anyway – well, not when you look at the Sydney Bridge’s true inspiration, the Hell Gate Bridge in (built during 1912-16). Now there’s a model for the Ozzie landmark if ever there was one!

Buy a Xmas pressie for yourself...
see here.