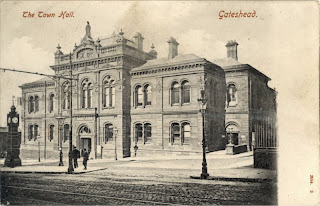 The building in central now known as the was designed and built by way of a torturous procedure during 1867-1870. An Act of Parliament, a design competition and the appointment of the appropriate officials all preceded the commencement of work – which led, eventually, to the building opening for business in February 1870. It remained the centre of local government for over 100 years.

The superstitious among the residents of the town may, however, have feared the worst for the future when an extraordinary accident befell the gathered throng on during the laying of the foundation stone. Officials, various hangers-on and a sizeable chunk of the town’s population turned up for the event, and the organisers thought it a good idea to erect two special platforms at the construction site to accommodate the crowd.

After refreshments at a local pub, the slightly tipsy officials turned up at around and took their places – along with several hundred others – on the aforementioned platforms. The mayor, Robert Stirling Newall, was handed a silver trowel with which to perform the ceremonial duties. This he did without incident, then the usual round of speeches commenced.

Everyone’s attention was soon diverted, however, by a loud creaking noise. To the general horror of all present, one of the platforms began to lurch groundward, taking around 500 unfortunates with it. After the dust had settled the site was carefully cleared, and twenty or so folk were wheeled off to the Dispensary. One fatality followed – that of 70-year-old Mr Barnet of Windmill Hills, who died a few weeks later following a blood infection caused by bruising to his feet.