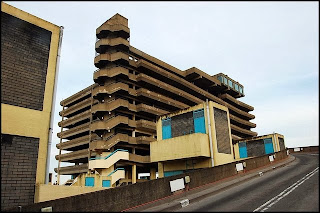 © Copyright philld and licensed for reuse under this Creative Commons Licence.

Gateshead’s Trinity Square Car Park (to give it its proper name) was constructed during 1964-69 and demolished as recently as 2010. It was always controversial: from its troubled construction, through its fitful existence, until, finally, the furore surrounding its planned and actual destruction. Yet it remains lodged in the minds of all North-Easterners of a certain age as the scene of the region’s most famous moment in the history of film.

The Owen Luder Partnership was responsible for its design, dreamt up, as it was, as a rival for Newcastle’s planned Eldon Square Shopping Centre. For the car park itself was only a part of a greater whole, sitting, as it did, atop the Trinity Square shopping precinct. The latter opened in 1967, the car park suffering construction problems which delayed its opening until 1969.

For four decades thereafter it dominated Gateshead’s skyline, to the delight of few and the distain of many. It found international fame as the starring venue of the 1971 gangster flick Get Carter, from which Michael Caine famously hurled Bryan Mosley’s character to his death.

Atop the car park stood the shell of a restaurant which was never actually used due to its inaccessibility. The shopping centre was utilised reasonably well throughout its lifetime, but the car park – unused for long periods – was never well liked and soon became unsightly.

Once hailed by experts as a Brutalist classic, it slowly fell into a state of dangerous dilapidation. Its film fame helped it stave off demolition for years, until it was finally dismantled during 2010 during phase 1 of the town centre’s long-term redevelopment.