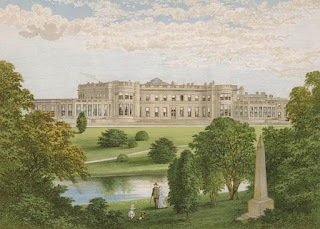 The Wynyard Hall/Park Estate, a few miles north of , has long been a beauty spot. Though the current magnificent mansion dates from a two-pronged building programme spanning 1822-41 and 1842-46 (divided by a catastrophic fire), its history – and reputation – as a site of splendour goes back many centuries.

In the mid-1600s, for example, it was described as fruitfull of soile and pleasant of situation, and so beautified and adorned with woods and groves as noe land in that part of the country is comparable unto them. In the ensuing two centuries, various avenues, terraces and gardens were added to enhance the landscape, until the Grecian mansion was added as per above. It was the 3rd Marquess of Londonderry who was responsible for the construction of the present edifice – the famous coal magnate himself – and it was at the brand new hall that, in 1847, a lavish birthday bash was laid on:


Amongst the distinguished company present was Prince Louis Napoleon, afterwards Emperor of . On this occasion there was a curious card party, which deserves to be made historical. The gentlemen who took a hand in it were Louis Napoleon, Benjamin Disraeli, George Hudson (the Railway King), and J.J.Wright of .

Disraeli, in fact, loved the place. On leaving for a trip to Wynyard he once said, “I never left with such a sense of relief and such anticipation of happiness.” More recently, Nikolaus Pevsner described the hall as “the most splendid 19th century mansion in the country.”

Royalty and the social elite have frequented the establishment, including visits in the Victorian era by Edward Prince of Wales and later by Queen Elizabeth II.

In celebration of the 2012 Olympics, GenesReunited are currently offering 20.12% off their Platinum subscription (offer runs until midnight on Sunday 12th August). Click below and jump to the 'subscribe' section.