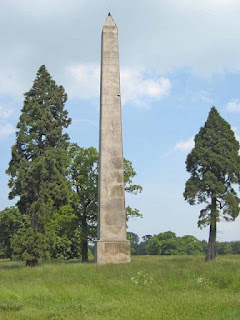 © Copyright OliverDixon and licensed for reuse
under this Creative CommonsLicence.

The famous Duke of Wellington was a regular visitor to the 3rd Marquess of Londonderry’s Wynyard Hall. They’d been companions-in-arms during many a military skirmish overseas during their younger days, and after the construction of the latter’s magnificent new pile in the 1820s the duke regular popped in for a cuppa and a chat.

In 1827, the marquess was so overcome by his friendship with the great man during one particular visit that he threw up a 127ft obelisk in his honour in the grounds of Wynyard.  Not only that, but the family wing of the mansion itself was nicknamed the Duke’s Wing – and this side of the house also held the Duke's Gallery, where the family kept their art collection.

As for the mighty obelisk, illustrated above, the inscription once read:

However, when, a few months later, was not given a place in prime minister ’s cabinet, the message was altered to, simply …