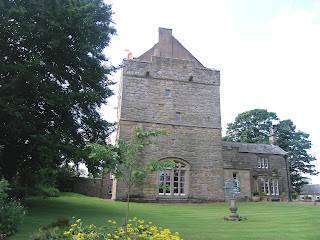 Elsdon in Redesdale, Northumberland, has a timeless air with many reminders of a bygone age. For all its turbulent history, it is a delight to the eye: picturesque with a rolling village green and a delightful array of stone houses. Here are to be found the Mote Hills which once housed the Motte and Bailey castle of the Umfravilles, Lords of Redesdale. They came with the Conqueror, William of Normandy, and were granted the lands of Redesdale to hold it against his enemies and wolves. The long-gone castle was built in the year 1080 and served as the headquarters of the Umfravilles until about 1157.

Elsdon Pele is a magnificent example of the fortified towers built on each side of the English-Scottish Border as both defence and sanctuary against the Border Reivers. It was built about the year 1400 for the Umfravilles but by 1415 it was in the hands of the Rector. His original home had suffered at the hands of Scottish Raiders. Not long before, in 1399, a Truce between the Scots and English had ended and the North of England was very soon afterwards plundered by the Scots. Elsdon was often a target. There is documentary evidence that the tower was standing in 1415 and that it belonged to the Rector – 'Turris de Ellysden' belongs to 'Rector eiusdem'.

It still preserves its character today even after many additions and renovations. The walls are massive and the original vaulted ground floor was once the pen of horses and cattle during Scottish raids or a place of refuge from feuding neighbours. The pele tower is a truly wondrous sight and dominates the village.

Although the was strong and fortified and offered shelter for the villagers in the endless raids from the Scots, there were many times when the people suffered at the hands of the infamous Border Reivers. An attack of particular note took place in September 1584 when Martin Elliot and five hundred men from Liddesdale attacked the village. Such great numbers indicate that the Scots came in reprisal for earlier raids against themselves. As the Scottish Border Reivers turned for home they left fourteen men dead, had burned down all the houses and made away with four hundred kye (cows), oxen and horses, insight (household goods), and taken four hundred prisoners.

From the records that still exist from the time it is clear that the raiding and reiving had reached an intensity that had existed for at least a hundred years before the Liddesdale raid. In 1498, the Bishop of Durham had threatened excommunication on the reivers of Tynedale and Redesdale (which included Elsdon) – not for attacks on the Scots, which was presumably acceptable, but for the family feuds which had reached such an intensity that God-fearing folk lived in daily terror of a raid from their own countrymen. The reiving was literally relentless – and the remedy hard to come by!

Today a visit to Elsdon is a great pleasure. It is a peaceful place nestling in rolling hillsides – yet proud of its history and its turbulent past. The church, pele tower, village green and the Mote Hills are all much as they were five hundred years ago – but back then every man looked over his shoulder, wary of the next attack to come screaming out of the hills.