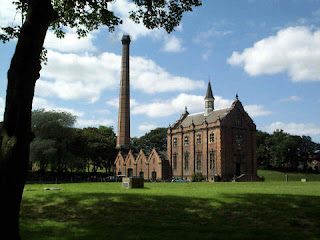 Now known as the , this splendid landmark is one of the best examples of its kind to have survived from the Victorian era.  It was opened in 1868 to serve the area, providing it with a supply of clean water for a century before it closed in 1967.  Though the station no longer pumps water, its two 100-horsepower beam engines are kept in working order and prodded into life for the benefit of visitors during regular ‘steam days’.
Like similar stations in the region, the idea was to draw clean water up from the magnesian limestone rocks below, and thus improve the lot of the expanding populations of the local towns – in this case Sunderland.  It was all in response to the cholera epidemics of the early nineteenth century, of course, and followed various Acts of Parliament which facilitated the creation of the Sunderland & South Shields Water Company in 1852.  In line with other similar stations (including that at Cleadon), Thomas Hawksley was the architect, the planning and construction process spanning 1864-68.
Museum website here.
Posted by HistoryMick at 12:45