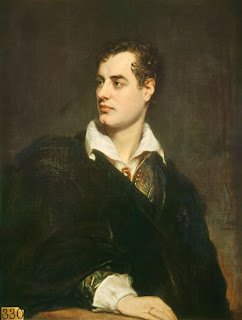 This most famous of phrases was once used to describe the flamboyant English poet, Lord Byron, remembered chiefly here in the North-East for his short-lived marriage to local heiress Anne Isabella Milbanke – the ceremony of which took place at Seaham Hall in 1815.
The moody, broody Byron and the prudish Miss Milbanke first met in London, and when the great poet deemed it necessary to rescue his perilous financial state by way of an advantageous marriage, his attention fell upon Anne Isabella, whom he considered “a very superior woman, and very little spoiled, which is strange in an heiress … an only child, and a savante … a poetess, a mathematician, a metaphysician … there was never … a more amiable being.”  And so they were married, in the Drawing Room of Seaham Hall on .
Within days they were bickering.  During their three-week honeymoon at her father’s estate at Halnaby in , the new Lady Byron was said to be “greatly distressed” by the “irregularities of her husband.”  Byron himself found day-to-day life at Seaham dreary – or more accurately, perhaps, the husbandly and social duties so.  A great quarrel occurred in the sixth week of their marriage, after which they lived separate lives, before they eventually formally separated on , little more a year after their marriage.  Byron soon left for ever – leaving his ex-wife and their baby daughter behind.
Note:  The Byrons’ daughter, , is generally recognised as the world’s first “computer programmer”, thanks to her work with the famous Charles Babbage – see here.
Posted by HistoryMick at 12:45