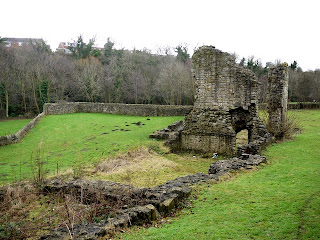 © Copyright Andrew Curtis and licensed for reuse under this Creative Commons Licence
Seemingly an early form of the modern-day village name of (-le-Dale), ‘Dalden’ Tower was built at least as early as 1375, when it passed from the hands of the Escolland family to the Bowes family.  Prior to the switch, the Escollands had changed their name to Dalden, the name of the village – hence the name of the structure.


For two centuries it remained a popular and well-used residence for the Bowes family, subsequently passing through the hands of the Collingwoods, Millbankes and Londonderrys, but it has been derelict since at least the early 1700s.  What remains implies that the structure was lofty, though not especially designed for defence – more residential, in fact; though there is some evidence of a moat. The living quarters on the ground floor were clearly high status, with elaborate fireplaces, as well as remains of two small shields dating from the 14th century.
There is little to indicate what the upper portions of the building may have looked like; but a tower seems likely (16th century), as well as, possibly, a circular turret, as evidenced by traces of a spiral staircase.  The site has been excavated twice, in the 1960s and the 1980s.
More pictures here.
Posted by HistoryMick at 12:45