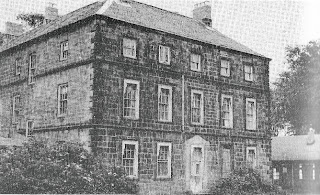 You can barely imagine it today, but in the middle of a 1960s housing estate in North Seaton, near Ashington, there once stood a fine classical house which went by the name of North Seaton Hall. Pictured above in its declining years, it may even hold the distinction (according to his daughter) of being architect John Dobson’s very first commission in 1813.
However, there was without doubt a building already on the site – and known by the same name – throughout most of the eighteenth century. Directories give 1710 as a possible starting point, when the Watsons were in early residence. It is more likely that Dobson carried out alterations in 1813 – and was most certainly back on the estate in 1831 to add some outbuildings (workers’ cottages and, possibly, the Gothic lodge).
The grounds occupied a wooded site north of the present B1334, near to the junction with the A189. The Watsons remained in residence until deep into the Victorian era, the estate falling into the hands of prominent industrialist Sir Isaac Lowthian Bell in the 1880s. In the 1950s, Pevsner noted the hall’s “very neglected” state; and in 1960 it was razed to make way for modern housing.