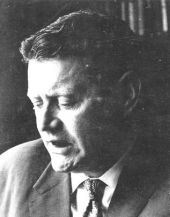 John Gerard Braine is the chap in question. Some of you may even remember him as a stalwart of the ‘Angry Young Men’ movement of British playwrights and novelists of the 1950s. He wrote several novels, the most famous being his first, Room at the Top, published in 1957.
Braine was born in Bingley, near Bradford, in 1922, leaving school at 16 to work in, firstly, a shop, then a laboratory, and a factory. By 1940 he found himself working as an assistant librarian in his home town. There are conflicting accounts of his biographical detail during the 1940s, but he seems to have abandoned his career around 1951 and moved to London to try his hand at writing. He struggled for some time writing articles and doing some radio work, before contracting TB and being forced into an extended period of convalescence.
Though much of the early to mid-50s were spent in hospital, he somewhat surprisingly popped up in Newbiggin-by-the-Sea in 1954, where he worked in the town’s library for a couple of years. One can only assume that it was considered part of his recovery programme. It was here that Braine both met his future wife and put the final touches on Room at the Top. He’d been working on the text for some six years before it finally hit the bookstands in 1957. Sadly, the library building in which Braine worked has now been demolished, the site now being occupied by a small car park.
Room at the Top was a massive success, selling 5,000 copies in the first week, 35,000 in the first year, and half a million by the end of the 1950s. It was made into a film in 1959 – “the first British film to take sex seriously and the first to show the industrial north as it really was” – and won two Oscars and three BAFTAs.
Braine left Newbiggin-by-the-Sea for the south of England in 1956 to lap up his success, penned another eleven novels, and died London in 1986, aged 64.
Posted by HistoryMick at 11:37