Of all the lost houses, castles and mansions of the region, is one of the more notable losses.  Today, a little to the south of the village church, lies a barely discernable collection of lumps and bumps in a field – it seems that not a single stone or brick has survived from pictures I have seen – yet this is how it was supposed to have looked in its prime, c.1728: 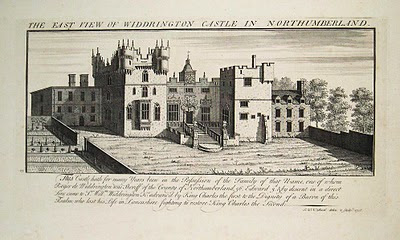 Not that it enjoyed much as regards a ‘heyday’, you understand. For despite its apparent grandeur, its history is brief, unremarkable and somewhat cursed. Earliest records indicate that Gerard Widdrington was granted a licence to crenellate in 1341, and the pile was still in use by the same family in 1415. King James VI of Scotland stayed at the house on his way south to claim the throne of England in 1603, providing the pile with perhaps its greatest claim to fame. It seems the house was greatly rebuilt and/or added to shortly after this, attaining its above form.
The Widdringtons ceased using the castle as their main residence in the 1640s, then subsequently disgraced themselves for their part in the Jacobite Rebellion of 1715 – the castle being confiscated by the Crown and sold to Sir George Revel. In 1720 it was described as ruinous. By marriage, it then passed into the hands of Sir George Warren in 1761, who demolished what was left of the place. Warren attempted a rebuild, but the new erection was destroyed by fire prior to completion. Undaunted, he tried again sometime after 1778, but this new Gothic-style effort fell into disuse as early as 1802. In 1832, it was described as “now obliterated” by historian Hodgson, a state assisted towards the end of the nineteenth century by the requisitioning of the remaining stone for the construction of a new vicarage.
And that was that.