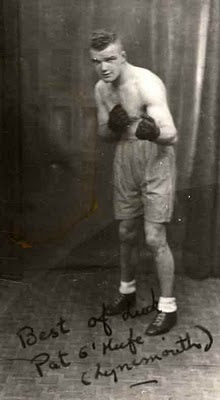 In the 1930s, Lynemouth became famous as the home of the O’Keefe brothers: six guys from the same coalmining family who all became accomplished boxers. Tommy was a pitmen’s lightweight champion – before going off to war with the Duke of Wellington Regiment in North Africa, Sicily and Italy; Pat (pictured above) was a respected middleweight who began fighting at 14; and Ralph Henry – better known as ‘Sexton’ – was a professional flyweight by the time he was 15.
Competing at a slightly lower, amateur level were Mattie, a welterweight who excelled in the ring during his navy years, winning several trophies; John, who similarly won titles in the forces (for the West Yorkshire Regiment) in the featherweight division; and Eddie, who seemed particularly proficient at dishing out knockouts – a couple of dozen in a row at one point – as a middleweight.
The brothers once challenged the world to find them another six brothers to fight. Needless to say, the appeal fell on deaf ears.