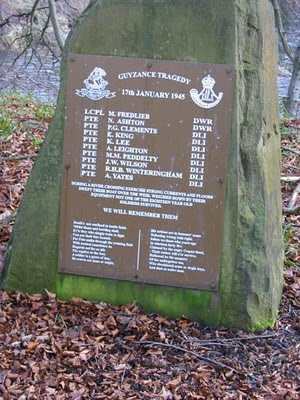 © Copyright Les Hull and licensed for reuse under this Creative Commons Licence
On 17th January 1945, a group of ten teenage squaddies convened on the banks of the River Coquet a mile or so upstream from the small village of Guyzance in Northumberland. The spot was once the site of the old Acklington Ironworks, and the eighteenth century dam constructed to power the plant is today considered to be one of the finest examples of its kind in England. It will now, however, forever be remembered as the scene of the Guyzance Tragedy.
The soldiers were serving in the 10th Battalion, The Duke of Wellington’s (West Riding Regiment) / Durham Light Infantry, and had been charged with the task of practising a river crossing. The river was in full flood, and locals warned the men against the action. The decision was taken to proceed, however, and the 18-year-olds entered the water one mile upstream from the weir/dam, quickly lost control of their craft and were swept down the Coquet and over the weir. Weighed down by their kit and the force of the water, all ten were tragically drowned.
The spot is marked with a modern-day copper plaque mounted on a block of sandstone, and by two older memorials mounted upon a post.
Posted by HistoryMick at 12:30