A famous local landmark, St.Cuthbert’s Cave is a large, natural sandstone feature 3½ miles west of Belford. It is not really a cave at all, but more of a rocky overhang – the sort of place where a couple of dozen ramblers could shelter from the rain without getting a splash on their cagoules. 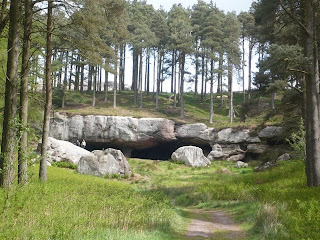 (© Copyright pam fray and licensed for reuse under this Creative Commons Licence )
Indeed, for the walking enthusiasts of the region it is something of a must-have; like the summit of Cheviot or the Simonside Ridge. Reachable by any number of ways from almost any direction, it does, however, require a little more than pulling up in a car park and wandering across the tarmac. Belford, with its close proximity to the A1, provides as good a launch pad as any, with a pleasant eight-mile round trip on foot easily negotiated along the dotted lines of your trusty OS map.

Its claim to fame, of course, is that it is reputed to have been a resting place for the monks of Lindisfarne as they fled with the mortal remains of the revered saint from the Viking invaders in the late 870s. They wandered for several years until finding a home at Chester-le-Street – the saintly bits finding their way, eventually, to Durham, of course. Now the cave lies on the course of the aptly-named ‘St.Cuthbert’s Way’, a 62-mile footpath linking Melrose to Lindisfarne, so is never short of company. Not that it ever has, judging by the age of the graffiti etched into the rocks thereabouts.
Posted by HistoryMick at 11:42