I have a soft spot for dovecotes. But you don’t see a lot of them these days, especially up north. But there’s an ever-so-nice one sitting a few yards to the west of the A1 in North Northumberland, about 4 miles north of Belford. It’s a little ‘industrial’, as dovecotes go, but it has that solid, compact, folly-like demeanour which I find so cutely attractive. Cuddly, almost.

Buckton Dovecote is cheating, though. For it has recently undergone a substantial facelift thanks to English Heritage and Natural England – and doesn’t it look absolutely splendid: 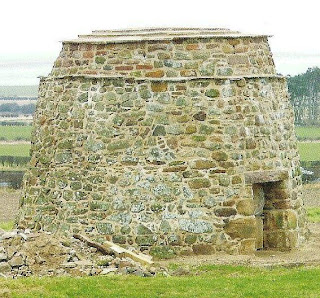 Dovecotes were probably introduced to the UK by the Normans – though the Romans may have beaten them to it briefly in the early centuries AD. The ‘beehive’ example at Buckton dates back to at least the early 17th century and, like all structures of its kind, was intended to house doves (or, more likely, pigeons) so that their eggs may be conveniently harvested, their manure collected and, of course, the birds themselves slaughtered for the dining table. Internally, beehive dovecotes contained dozens (sometimes hundreds) of nesting boxes for the birds, who could enter and exit through the roof, with a human-sized door allowing access for the collection of eggs and, er, droppings.

There is currently no public access to Buckton’s fine little effort, but it can be seen from both the A1 and the minor road which leaves the main thoroughfare at Buckton.

[info and image from the splendid Archaeology in Northumberland, Vol.18, by Northumberland County Council]
Posted by HistoryMick at 09:00