In 1966, a curious film entitled Cul-de-Sac passed through our cinemas. Best described as a black comedy-cum-psychological thriller, it was a typical effort by controversial director, Roman Polanski. Set in its entirety on the Holy Island of Lindisfarne, it is perhaps the closest the region has ever got to film noir.

Essentially, it tells the tale of two on-the-run criminals who stumble upon the residence (Lindisfarne Castle) of the effeminate George (Donald Pleasance) and his beautiful and wilful young wife, Teresa. As they await rescue by their boss, the two crooks force themselves upon the odd couple, one of the men dying from the wounds received during their bungled robbery. The remaining trio embark upon a strained and increasingly strange relationship, even feigning normality during a social visit to the castle by friends of the couple. 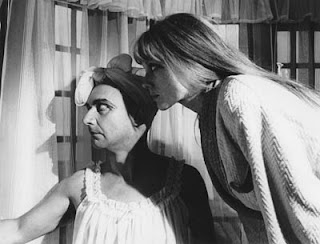 Pleasance (left, I think) camps it up in Cul-de-Sac.
I won’t tell you how it all ends. It’s not that I don’t want to spoil it for you, but rather that I simply can’t remember. Well, it was a long time ago when I forced myself to sit through it.

Stranger still than the film itself is the fact that in 2007 Hollywood superstar, Jack Nicholson, claimed that it was his favourite movie of all time. I’ve made you curious now, haven’t I? I suppose you want to see it.

* Quote from Polanski scholar, Ivan Butler.
Posted by HistoryMick at 11:28