High on the moors to the east of Allendale Town can be found not one, but two little landmarks by the name of Stobs or Stobb Cross. The most northerly of the two seems to be the oldest of the pair, represented, as it is, on OS maps in ‘Old English’ style text, and the other appears to be a more modern creation. So who, or what, exactly was the mysterious ‘Stobb’? 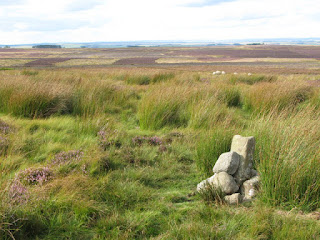 Stobs Cross at NY869588… (though I think it’s collapsed a bit more lately)
© Copyright Mike Quinn and licensed for reuse under this Creative Commons Licence. 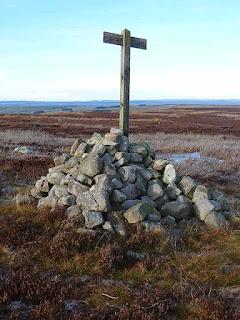 … and Stobb Cross 3 miles to the south.
© Copyright Oliver Dixon and licensed for reuse under this Creative Commons Licence.

One would at first assume it was the name of a historical person, but it seems not. For one thing, there is no apostrophe in “Stobs” and, well, if you think about it, the name ‘Stob(s)/Stobb(s)’ does seem to pop up quite a lot in placenames – mainly out-of-the-way, lofty spots, to be precise. ‘Stob’ is, in fact, a Middle English word meaning ‘stub’, ‘post’ or ‘stump’. This could mean that as an originally substantial stone cross or column deteriorated over time it came to resemble a stump, and was labelled thus by the locals – hence ‘Stobb’ Cross. Just to confuse matters, though, in Gaelic, ‘Stob’ means a small peak – so there’s another possibility for you.

The northerly effort (top picture) – being, we think, the oldest – is no more than a medieval waymarker for wandering folk, possibly starting life as a boundary stone. The fact that it seems to have traces of two cup-and-ring marks in the stubby shaft probably means that it was harvested from some other prehistoric monument. As for the other more substantial structure, there is no evidence that it was once a prehistoric burial cairn, as has been suggested, and is probably just another wayside marker. For the record, both are shown on the 1865 Ordnance Survey map, with exactly the same spellings.