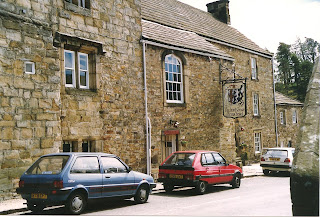 The Lord Crewe Arms, taken by the
author in 1991. Other than the cars,
not a great deal has changed.

One of the North-East’s most picturesque villages, Blanchland sits quietly in a fold in the moorland landscape near the head of the Derwent Reservoir. It is situated on the Northumberland side of the nearby border with County Durham and gets its name from the order of ‘White Canons’ – the Premonstratensians – who settled there in the twelfth century.

The religious order obviously had its abbey, and, though there isn’t a great deal of this left today, a sizeable chunk of the complex forms the present-day Lord Crewe Arms, one of the most famous inns in the region. Essentially, the former abbot’s guest house is understood to have occupied the building utilised by the paying public today; and the pub’s garden was once the abbey’s cloisters.

The abbey was dissolved in 1539, and the old buildings found themselves in the hands of, firstly, the Radcliffe and then the Forster families – it essentially becoming a manor house, used regularly to host upper class hunting parties. When the Forsters fell from grace thanks to their Jacobite tendencies, Lord Crewe, Bishop of Durham, took over the reins. And this is, of course, where the establishment’s name comes from. And though he died within a few years of his takeover (1721), he left the estate to the Lord Crewe Trustees – in essence, leaving it to charity.

Then came the leadminers, and the general growth and prosperity of the village. The old manor house then became a pub, pretty much out of necessity, and, in time, the site developed into the impressive inn we see today.

And though it doesn’t openly boast about it, the Lord Crewe Arms has quite an interesting history – much of it surprisingly recent. Quite apart from being able to hark back to the days of the White Canons and their abbey, ex-owners the Forsters brought infamy upon the place when ‘General’ Tom Forster hid in the establishment’s giant fireplace during the Jacobite rising of 1715. The Blanchland days of this infamous family are also recalled in Walter Besant’s historical novel, Dorothy Forster.

Then there is the rather well-known W. H. Auden, who stayed at the Lord Crewe Arms at Easter 1930, remarking that “no place held sweeter memories.” Auden and Christopher Isherwood’s play The Dog Beneath the Skin (1935) may have been partially set in the village, too.

Poet Philip Larkin is also known to have dined at the Lord Crewe Arms; and in 1969 Benjamin Britten and tenor Peter Pears stayed at the inn.

Needless to say, that due to its timeless beauty, TV and film cameras have made regular use of Blanchland’s byways – from Catherine Cookson dramas to recent children’s fantasy effort Wolfblood – so you may well have seen the old pub pop up on the small or silver screen from time to time.

And to add to all of this, the inn is, of course, haunted – by not one but three ghosts (at the last count, that is). See here for a full account of the spooky goings-on at this fantastic old place.