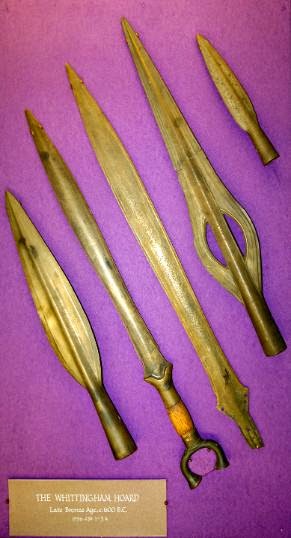 In the winter of 1847 – February, to be precise – workers found a small collection of Bronze Age artefacts which provide a shadowy insight into ancient . In a muddy field near Thrunton Farm a little to the SE of Whittingham, two bronze swords and three spearheads were found buried in the peat during drainage work – but in a strange upright, circular arrangement.

The odd and quite deliberate grouping suggests a ritualistic reason for the deposit. What must, at the time, have been very valuable objects were surrendered by their owner(s) and offered up to the gods for reasons which we will never know. They date to around 550BC – the very end of the Bronze Age – and illustrate the quality of weaponry being used at this time. A horned pommel sword (above, second from left, and known as the ‘Whittingham Sword’) is a state-of-the-art, continental-style piece of kit and indicates interaction between the locals Brits and the European mainland.

The hoard is now in the possession of the Society of Antiquaries of Newcastle-upon-Tyne and is housed in the city’s .