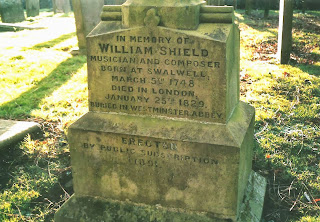 In memory of
WILLIAM SHIELD
Musician and composer
Born at Swalwell,
.
Died in ,
.
Buried in Abbey.
Erected
by public subscription
1891.

The above memorial – a stone cross atop an engraved base – sits at the west end of Whickham churchyard. William Shield, the son of a local boat-builder, began his musical career by fiddling on his fiddle whilst apprenticed at his father’s trade. Losing his parents whilst still a child, he went on to study music with Charles Avison in . Throughout his youth he appeared at local gigs until his reputation gained for him the chance to opt for a full-time musical career.

He was a violinist, violist and, most famously, a composer – rising to lead the Spa Orchestra at . One of his most notable early efforts as a music writer was to pen a piece for the consecration of St.John’s Church, , in 1769 at the specific request of the Bishop of Durham.

For 18 years Shield was first viola at the Italian Opera in , and also found time to play with, and be composer to, Covent Garden Theatre (now the Royal Opera House). He became acquainted with Joseph Haydn during the great man’s visit of 1791, which further inspired him to write many operas and other stage works. In 1817 he became Master of the King’s Musick.

Like many of his type of the time, Shield plundered local folk music for his own purposes – in his case, that of Northumberland and . Many of his pieces were light and popularist in nature – more or less forerunners of what we now know as ‘musicals’. He has been strongly linked with the New Year ditty, Auld Lang Syne (the tune’s composer, that is, set to Robert Burns’ words), but no conclusive evidence has been unearthed to back this theory (it appears briefly near the end of his opera Rosina). It is far more likely that the roots of the famous old tune lie buried in English/Scottish/Border folklore – a rich pool of material into which Shield (and indeed Burns) regularly dipped their talented toes.

He died in on (coincidentally, Burns Night) and was interred in Westminster Abbey at the specific request of King George IV.