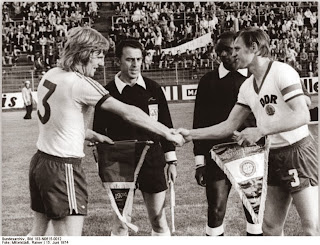 Peter Wilson, left, at the 1974 World Cup (From Wikipedia)


Felling is quite famous for its footballers. Chris Waddle, for one, was born there; as was Albert Watson, who was a regular between the wars. But perhaps the most curious is one Peter Frederick Wilson, who was born in the Tyneside town in 1947.

A tough, uncompromising defender, Wilson was unable to make the grade in (, actually), so emigrated to in 1969 where he joined South Coast United. His career there soon blossomed, and within a year was representing at international level. He made 65 appearances for his adopted country, scoring three times – and, most famously, captained the team during the 1974 World Cup Finals tournament in .

Australia’s first foray into the final phase of the competition was met with little success, as they were beaten 2-0 by East Germany, 3-0 by West Germany and drew 0-0 with Chile (which sent them home early). But it was a ground-breaking achievement for the rag-tag bunch of individuals, and Geordie-boy was at its heart – he can be seen exchanging pennants with the East German captain in the picture above. Including representative games other than full internationals, he pulled on the Ozzie shirt a total of 116 times during 1970-79 – an amazing achievement. Ironically, his final appearance was at the Newcastle International Sports Centre, .

The really strange thing about the story, though, is his activity since his sporting retirement – or rather the lack of it. After falling out with ’s soccer hierarchy, ‘Big Willie’ (as he was called) drifted out of the game and has not spoken publicly for more than two decades – living, as he does, as a recluse near in . When tracked down by a newspaper in 2005 he responded from his mountain hideaway with, “There’s nothing I want to say. I've got nothing to add.” He was, it was noted, heavily tattooed, had a Harley Davidson parked in his driveway and owned a Clydesdale horse called Bonza – and his ‘home’ was surrounded with barbed wire.