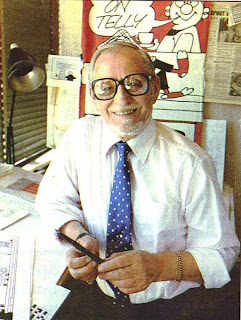 Andy Capp, that fag-bearing, beer-swilling – and hen-pecked – stereotypical northern bloke, was born in – or rather his creator was, namely one Reginald Smyth, in July 1917, at .

Reg was a very ordinary sort, born to working class, often bickering, parents, who had been forced together by a shot-gun wedding.  His father liked his drink, and his mother never tired of reminding him of it – sound familiar?  Well, although Andy Capp’s long-suffering wife, Flo, was based on Reg’s mum, Andy himself was an amalgam of much that was evident by way of male role models in the days of his creator’s youth – and not specifically his own father.

The family wandered between and as the marriage ebbed and flowed, young Reg leaving school at 14 to become a butcher’s boy.  He later saw action during WWII in and the – a time during which he honed his cartooning skills with his ‘pals’.  After the war, he joined the GPO and married.

Encouraged by his friends and family, he embarked on a little cartooning work for the Northern Daily Mail, then got his break with The Daily Mirror in 1954 when he was taken on full-time – and added an ‘e’ to his surname so that he may seem ever-so-slightly posher to southern readers. His famous layabout creation finally appeared on when Reg was prompted by his boss to devise a new character – and Andy Capp, the man who was a ‘handicap’ to his wife, was born.

Andy – and Reg – went onto international stardom, of course; but the artist soon tired of life in and moved back to for the final two decades of his life, dying in 1998 aged 80.

[the above is based on an interview given by Smyth’s cousin, Ian Smyth Herdman, to the Sunderland Echo on – see here]