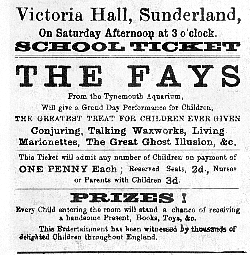 The largest catastrophe of its kind ever to take place in the UK occurred on 16th June 1883 in Sunderland, when 183 children died of asphyxia at the base of a stairwell in the town’s Victoria Hall.
Tempted by The Fay’s travelling entertainers from Tynemouth Aquarium, upwards of 2,000 youngsters descended on the now long-gone theatre which used to stand on the junction of Toward Road and Laura Street, overlooking Mowbray Park. The variety show was a magnificent success, until its tragic finale – the children having been royally entertained by the show’s many tricks and illusions. At the end of the afternoon’s antics, with the audience at fever pitch, the much anticipated hand-out of free gifts commenced – a random process for the most part, though specially numbered tickets had precedence.
As those in the stalls began benefiting first, a certain amount of confusion and panic spread throughout the gallery as those in the upper reaches of the theatre feared they would miss out. Keen to collect any gifts on offer – a rare treat indeed for youngster of the day – the 1,000 or so children began swarming downstairs – to be met with a partially bolted door and no way of escape.
Reports as to how the situation arose – and who was to blame – differ wildly. The net result was indisputable, however, as a massive crush – some say as much as twenty bodies deep – ensued. As the few adults present tried desperately to release the locked doors, the children kept on piling in from the staircase above. By the time the doors were finally ripped from their hinges, a total of 183 youngsters had perished in the writhing mass – 114 boys and 69 girls, almost all of them between seven and eleven years old. Some families lost three or four offspring – and one entire Bible Class of 30 from a local Sunday School was wiped out.
The national outcry which followed resulted, directly, in the passing of new laws that required all public venues to have a sufficient number of exits, and that all exit doors must open outwards – which led to the invention of the now familiar ‘push bar’ emergency door.
There are many excellent sources of further information on the Internet, including:-
Wearside Online (very full account);
BBC (including victims list);
Sunderland City Library Handout (many photos);
Wikipedia (good list of further sources).