If you could stop your car on the busy A19 dual carriageway at the point where it crosses the River Wear and peer over its eastern edge into the valley below, you would be staring at the exact spot of the long-gone Hylton Ferry.
The old ferry – and the ford which pre-dated it – used to carry traffic using the original main Sunderland-Newcastle road, in the days before the ‘modern’ bridges which span the river a little downstream. It is difficult to believe it now, but it’s true – and in fact despite being superseded by the Queen Alexandra and Wearmouth Bridges from the 1790s onwards, the old ferry itself didn’t disappear completely until the 1950s. The last ferryman – Charlie Darby – died as recently as 2002, aged 99.
The earliest reference to a ferry on the site is in 1322, when Robert, Baron of Hilton, granted to his chaplain, William de Hilton, “the passage of Bovisferry” – in other words, a means by which cattle could be transported across the river. Quite what forms this ancient ferry assumed over the centuries no one will ever know, but by the eighteenth century it seems to have been assisted by a guide-rope stretched across the river to prevent it from being swept down on the tide at certain times of the day. In the nineteenth century it became known as the Horse Ferry, and it developed into a flat-bottomed boat operated by way of a chain windlass – the chain lying on the river bed, and the whole thing being wound by hand. You can get a pretty good idea of how it looked from the picture below. 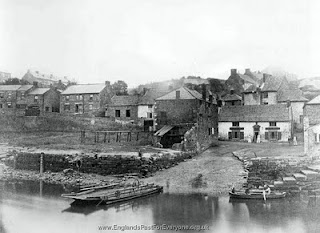 Most sources have the chain ferry being dismantled around 1915. But despite this – as well as the coming of the bridges and metalled roads – dear old Charlie Darby kept a ferry service of sorts going for as long as he could, until his boat was pulled from under him fifty-odd years ago – and another ancient way of life passed into history.
For further information see here, and here (lots of pics!).
Posted by HistoryMick at 10:08