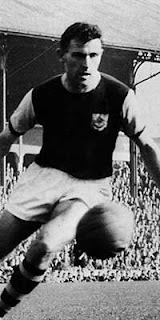 Well, if you’re a Burnley fan, anyway. The chap in question being one John Angus, a ‘one-club man’ who spent his entire professional career playing for ‘The Clarets’.
Angus was born in Amble on 2nd September 1938, and was plucked out of local schoolboy football by the Lancashire outfit in 1954. A year later, on his 17th birthday, he signed his professional papers. He took some months to settle, but the day after his 18th birthday he made his first-team debut for Burnley against Everton, performing well in a 2-1 victory. He was in and out of the team for a couple of seasons; but on the arrival of new manager, Harry Potts, Angus became a regular at right-back. And there he stayed for the rest of his career.
‘Cool John Angus’ was one of the key pieces in the Burnley jigsaw which saw them win the Football League Championship in 1960. He was known for his calm and collected style of play, usually carrying the ball out of defence rather than ‘hoofing it up the park’, as was so often the norm in those days. He was rewarded with international honours at Youth and Under-23 levels; and won a single full cap for England – in a 3-1 defeat against Austria in 1961 – when he was, ironically, played out of position at left-back. With the likes of Jimmy Armfield and George Cohen ahead of him in the queue for the right-back spot, Angus never played for his country again – though England manager, Walter Winterbottom, described his performance as one of the best debuts he had ever seen.
He hung onto the No.2 shirt at Burnley through until the club's relegation from the top division in 1971, played two matches in Division 2 the following season, then retired due to injury. He played a total of 521 games for his beloved club.
Last I heard, John Angus was living in contented retirement in Warkworth.
Posted by HistoryMick at 11:56