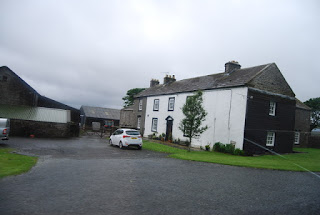 © Copyright N Chadwick and licensed for reuse
under this Creative Commons Licence.

These days, the Old Spital equates to the farmhouse building of a roadside farmstead on the infamously desolate A66. It was once an old inn; and previous to that - a very long time ago - a medieval hospital, hence the name. Over the years it has invariably featured in the history books as the venue of a tale of folklore-ish proportions known as the ‘Hand of Glory’.

But, starting at the beginning, the medieval hospital was originally set up in the 12th century by the Abbot of Marrick (Richmondshire). Nearby we can find other similarly named place-names such as Spital Grange, Spital Park and Spital Farm. Over the years the Old Spital has been known by a variety of names: The Spittle-on-Stainmore, Spittle House, then, by the turn of the 19th century, the Spittle Inn (having been rebuilt in the late 18th century).

The ‘Hand of Glory’ incident dates to around this time, c.1800, when George Alderson and his family ran what was described as a ‘homely hostelry’. Helping them out - and central to the story - was a maid called Bella. In those days the ground floor of the building was occupied by stables and the like, and the upper stories were reached by stairs from the road. The story goes that on a stormy October evening, after the inn had been locked up for the night, the occupants were roused by a knock on the door. Alderson had been to Brough Hill Fair that day and had in his possession a large sum of money, so was wary of any unexpected visitors. Anyway, the door was answered and what appeared to be a bent old woman in a cloak and hood was admitted. She refused bed or food, insisting instead that she be allowed to rest by the fire as she had to resume her journey early the next morning. A little suspicious of the strange looking character, Bella the maid was instructed to stay in the room with the old lady and she curled herself up in a blanket feigning sleep.

In time, the mystery visitor stood up, revealing themselves to be a tall man disguised in woman’s clothes. From his cloak he took out a withered human hand - the Hand of Glory - and placed in it a candle. He bent over the maid and muttered: Let all who sleep, sleep on; let those who are awake, be awake.
The candle brightened, and the stranger opened the door, stepped outside onto the stairway and called for his companions. But Bella, still awake, rushed to the door, pushed the man down the stairs, and bolted the door behind him. The family, though, could not be woken - until, that is, she doused the candle with a cup of milk. George Alderson, suitably stirred, then rushed into the room and fired his blunderbuss from a window. After some time there was a shout from the darkness: Give up the Hand of Glory and we'll not harm you.

Another shot was fired ... and no more was heard. The withered old hand was, apparently, kept by the Aldersons for some time before being buried beneath the local gibbet.
In case you’re wondering (and I’m sure you are) a ‘Hand of Glory’ is the dried and pickled hand of a hanged man; and the accompanying candle is made from the fat of a hanged man. The two in combination are supposed to have magical powers, including keeping still a sleeping person to whom they are shown. And milk is the only thing that can dowse such a cursed light.