Quite apart from the misconception about the derivation of its place-name (no, it has nothing to do with trains, stations and whistles), the town of Haltwhistle has several historical and geographical ambiguities which have yet to be put to bed. Here are a few of them:

(1) The locals claim with absolute certainty that their little town is located at the geographical centre of Great Britain. The thing is, it depends on what method of calculation you use to work out such things; and, because of this, several locations across the land make the same claim. It’s complicated, but Haltwhistle’s case is based on the fact that it is on the midpoint of the longest north–south meridian running the length of the country and is also approximately at the midpoint of each of the lines through it across Great Britain along the 16 main compass directions. The claim is in some ways ‘stretching it’ a bit, but in others really quite convincing – the Wikipedia entry here may be of some interest to those of you keen to take the matter further.

(2) The parish church of Holy Cross, Haltwhistle (NY708640), contains an ancient relic known as the ‘old water stoup’. It is a roughly-shaped stone bowl on a stone column and is distinctly unimpressive, if the truth be known. The great Christian missionary, Paulinus – who is known to have been in Northumbria during 625-32AD doing his thing – is said to have used the stoup as a font for baptismal purposes. Possibly. As for its origins, the old font/stoup may well have begun life as a Roman altar. Possibly. 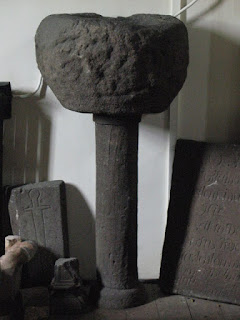 (3) There is an old disused railway viaduct to the south of Haltwhistle called Alston Arches (NY709638). It spans the River South Tyne before the line it used to carry curled away towards Alston to the south. It is a remarkable and quite beautiful survival, but is especially notable for the conspicuous archways it has running through each of its supporting piers. No one quite knows why they are there. It was once assumed that there was a plan to drive a footway/bridge through the gaps for pedestrian use, which is a lovely (and surely unique) concept; but it is more likely that they were built into the bridge’s construction to lighten the structure’s weight, which is built on timber piles. How boring. 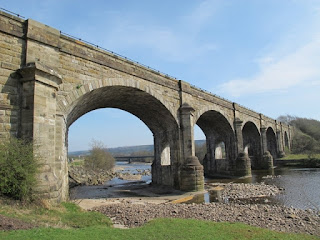