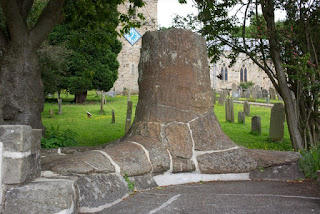 © Copyright Paul Buckingham and licensed for
reuse under this Creative Commons Licence.

Stanhope’s famous fossil tree can be found built into the town’s churchyard wall, being one of the region’s most eye-catching oddities. A nearby plaque reads:

This great tree grew in a forest of the middle carboniferous period (about 250 million years ago) near Edmundbyers Cross now 1,550 feet above sea-level. As its vegetable matter decayed this was replaced by sand which has formed a perfect cast in hard ganister. The roots (stigmaria) show their characteristic form. The tree was brought to Stanhope and erected here in 1962 by Mr J.G.Beaston.

Edmundbyers Cross is a little fragment of antiquity to be found by the roadside of the B6278 about three miles north of Stanhope – and the quarry in which the fossil was found (along with a couple of other specimens, apparently) is still marked on OS maps. The finds, which were made in 1905 (some sources say 1915), lay goodness-knows-where until one of them was deposited on the edge of the churchyard several decades later by the said Mr Beaston. The chap in question was a local quarrying entrepreneur with a particular penchant for ganister stone.

Some consider the placement of the tree somewhat ironic given the church’s belief that the age of the Earth is around 6,000 years old!