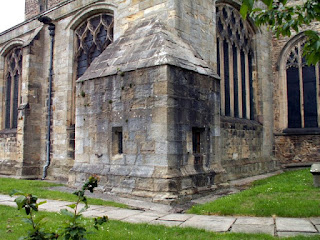 In the days before police constables as we know them plodded the streets of our towns and villages, general law and order was a somewhat haphazard affair. Quite often it would be the local churchwardens who would be pressed into service when a miscreant was identified – and any troublesome individuals would, temporarily at least, be thrown into a local ‘lock-up’ until they cooled down a bit.

There are not a lot of these curious little buildings left, but one such strongroom remains in the village of Staindrop – still resolutely attached to the substantial church of St.Mary’s. Very little is known about its history, other than it was originally added to the south aisle several hundred years ago as a vestry to the chantry chapel (the Lady Chapel, actually) to which it is attached. Its change of use necessitated the opening up of an external door (see above – right-hand window) – indeed early photographs of the building still show the door intact. It has since been reformed into a window.