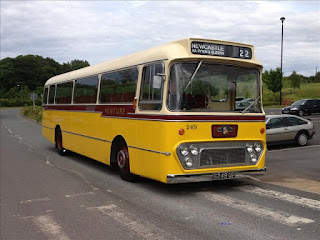 Those of a certain age who live in, or frequent, the will remember a grand old bus company by the name of Venture Transport. They were once major players in the public transport industry, and have actually made a mini-comeback of late, to the delight of many.

In the early days of motorised road travel - the immediate post-WWI era - many dozens (hundreds?) of independent bus companies battled for the custom of a populace who didn’t own very many cars between them. And Venture Transport, who were based in Consett and ran services around and about the Co.Durham town, were at one time the biggest concern of their kind in the North-East. With a pool of vehicles hovering around the 80-90 mark, for many years they played a very important role in the lives of a great number of people.

Launched shortly after the First World War, they expanded further after amalgamation with Robson Bros and Reed Bros in the 1930s, by which time their distinctive yellow, maroon and cream livery had become well-known. Operating out of Consett, the company maintained depots at High Spen and Blackhill, and, in time, integrated its services with the United and Northern bus companies, whilst remaining independent.

As the market tightened and the private car industry boomed, Venture experimented with the car sales, hire and servicing industry - and it also provided tours and excursions.  In time, though, things got a little too tight, and in 1970 it was eventually swallowed up by the giant that was the Northern General Transport Company - though its fleet still extended to an impressive 86 buses and coaches, and many vehicles maintained the distinctive ‘look’ for some time thereafter.

Though the Venture name disappeared from our streets for a time, Go-Ahead Northern revived the name shortly after deregulation in 1986; then relaunched it yet again recently by way of a network of services between and around Consett and Stanley. So, once again, the familiar colours of the Venture buses grace the roads of the North-East - if in slightly fewer numbers.