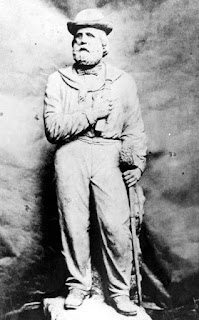 If you studied Italian unification at school, then you’ll know all about Giuseppe Garibaldi, the famous general and politician who had rather a lot to do with the creation of the present-day Mediterranean state. But his fame extended well beyond the borders of his own corner of the world – and he was especially popular on Tyneside.

The enthusiasm among the North-East’s working classes for Garibaldi was largely down to Blaydon’s very own Joseph Cowen Jnr, the industrialist and Radical politician who was very prominent in Tyneside affairs in the Victorian era. He championed the cause of many a European revolutionary movement, and entertained several prominent figures from the continent at his home, Stella Hall, in Blaydon (now demolished). And, in 1854, it was Giuseppe’s turn to answer Cowen’s call.

As it happened, Garibaldi was in the middle of his travels anyway, and needed to pop into the to pick up some coal. As for his North-East stay, he arrived on and left in late April. Spending most of his time in , he popped up river to Blaydon at the behest of Cowen for a very brief sojourn. Whipping the locals up into a frenzy, the eager host eked every last bit of positive propaganda out of the visit – with memories of the occasion surviving comfortably into the modern era.

Anyway, Cowen gave his guest ‘the tour’, presented him with a gift or two, then off he went back to Italy where he eventually carried through with his unification process during the 1850s and 60s. Back in Blighty, Cowen mused over the experience for a few years, before eventually erecting a statue of the great man in the grounds of his Stella Hall estate. It was created by sculptor George Burn and erected in little to the north of the present-day remains of the ‘Summerhouse’ which still overlooks Blaydon.

Cowen died in 1900, and very soon afterwards the statue disappeared. Fingers were pointed at Cowen employees, who had had to pay a penny towards its construction; but a more likely story is that it was sent into the undergrowth at the base of the hill by playful youths. Shattered into several pieces, all but the head were then lost forever – with Garibaldi’s bearded bonce finding its way into a builder’s garden by the 1940s, then eventually, in 1977, into a glass case in Blaydon Library. It’s still there today.

Garibaldi made a second visit to the in 1864, but the somewhat nervous authorities sent him packing almost immediately – and before he could so much as contemplate a return to Tyneside. It may have been this rebuffal that prompted Cowen’s statue a few years later.