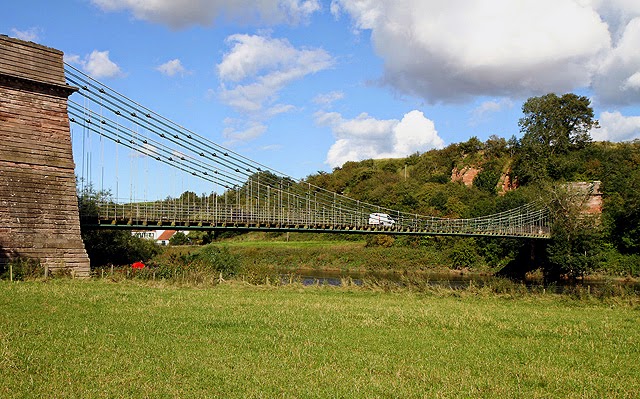 © Copyright Walter Baxter and licensed for
reuse under this Creative Commons Licence.

Spanning the River Tweed about a mile downstream from the border lies a little known piece of European engineering history in the shape of the Union Chain Bridge. When opened in 1820 it was the longest iron suspension bridge in the world and the first of its type to carry vehicles.

It stretches for a mightily impressive 449ft, linking and , and does so quite majestically. It was built because there was a need for a river crossing at this point – primarily for the transportation of coal and lime (the latter for agricultural use). Financed by the local Turnpike Trusts, the commission for its design and construction was handed to retired naval officer, Captain Samuel Brown, who reckoned he knew enough about iron chains and links and such like to suspend a roadway across the considerable gap. And, at a knock-down price of £6,500 and an eleven month schedule, he delivered as promised.

When it opened on , it was quite an occasion. Some of the most important civil engineers of the day were present (including Robert Stevenson and John Rennie, who both had some input into the scheme), and its strength was proven with the crossing of several loaded curricles and carts as well as 600+ pedestrians. The lengths of chain hung from two giant towers, and the bed of the bridge was made of wood.

The bridge’s upkeep was financed by tolls – until 1883, that is, when tolls were abolished. The essentially sound bridge has, of course, been patched up over the years – most notably in 1871, 1902 and 1974 – but it is now in need of around £5million’s worth of repairs to restore it to tip-top condition. And the campaign is on to do just that in time for its bicentenary in 2020 – see here.