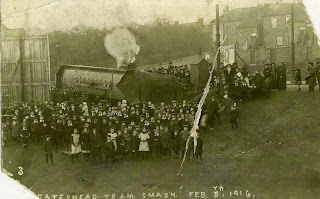 Private Edward Hutchinson was one of the many who dutifully joined up (with the Durham Light Infantry) during the First World War – doing so in mid-September April 1915 his battalion was posted overseas, where he fought in (and survived) the Second Battle of Ypres. Returning home due to sickness or injury, he found himself in the suburb of Bensham in early 1916.

Despite his major scrape with death in the trenches, had the ironic misfortune to find himself crushed to death under a runaway tram one chilly winter’s evening, in what became known as the Bensham Tram Crash of .

The vehicle in question was travelling up Bensham Bank, having just passed the junction with , when the driver, 20-year-old motorman Leonard Jane, applied his brakes and left his tram to assist a colleague in an oncoming vehicle who had had to deal with a fight. In his absence, the half-full car filled with several more passengers and the extra weight caused it to trundle slowly backwards. On meeting the junction with , it turned sharply and its momentum caused it to topple over.

All on-board survived (though there were several injuries, including a couple of broken legs), but the four pedestrians trapped under the hulk of the falling tram were all killed – among them our WWI veteran. The other three were all members of the Morrell family – a father, mother and a boy of seven. The distraught motorman was later acquitted of manslaughter.

Strangely, tramcar No.7 was later repaired and pressed back into service – and it now enjoys a new lease of life at the in Derbyshire.