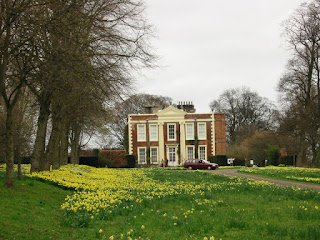 © Copyright PGlenwright and licensed for reuse
under this Creative CommonsLicence.

A little to the north of Bournmoor and to the west of Shiney Row, lie the beautiful, tranquil grounds of Biddick Hall. The residence – now a privately-owned venue for functions – dates primarily from the eighteenth century and has been associated with the famous Lambton family since they purchased to estate at the tail-end of the 1500s.

The equally well-known Bowes family originally owned the land and the first manor house, but the site was remodelled by the Lambtons in the early 1700s – in a style described as ‘Queen Anne Baroque’. The somewhat eccentric and oversized Ionic pilasters of the entrance dominate the structure – it has been suggested that the design may have been based on a sketch by Sir John Vanbrugh who worked at in 1721.

About a century later, in c.1837, the Lambtons moved out and into their brand new to the south-west. ‘Lesser’ family members (and occasionally tenants) then took over at Biddick Hall, though it continued to be added to, structurally, until well into the twentieth century. With the decline of their ‘castle’, the top-rank Lambtons moved back to Biddick in 1932 after some further remodelling.

As per the recently revamped , Biddick Hall was used in 2012 by the in the production of the period drama The .