As you can no doubt guess from the settlement’s place-name, Bishop Middleham, a little to the north-west of Sedgefield in Co.Durham, was once the site of the Bishop of Durham’s residence. Though you wouldn’t know it if you went poking around the village today.

It is, however, likely that it existed as simply ‘Middleham’ in the 9th and 10th centuries, as the first recorded mention is in a 1146 grant of the local church to the Prior of Durham – and thus giving the settlement its full name. By the time of the Boldon Book in 1183, there were 32 households collected around the little church – and it seems the Bishop clearly had a residence there for a good couple of hundred years during 12th-14th centuries. Furthermore, it must have been well-favoured, as two of the said officials died there.

The Bishop’s manor house – for that is what it most likely was, rather than a ‘castle’ – would have enjoyed a lofty setting, high on the promontory which extends to the south of the present-day village and church. All substantial traces of masonry have long since disappeared, though examinations of the existing earthworks suggest the former presence of a strong and well-guarded affair. There is no documentary evidence to suggest that any high status structure survived in use beyond 1600 – and indeed the remains are so scanty that they have even been omitted from some editions of the OS maps over the years. 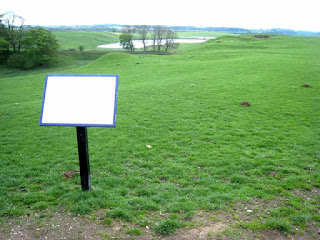 © Copyright OliverDixon and licensed for reuse under this Creative CommonsLicence.

But a nice artist’s impression of it in its heyday can be seen here (church is to the left).