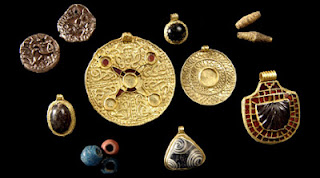 In 2004, excavation work began on one of the most remarkable archaeological finds ever made in .  At Street House Farm, a little to the north-east of Loftus, was unearthed a 7th century burial site containing the remains of an Anglo-Saxon princess.

Over the course of the next few years, experts painstakingly retrieved the grave goods and unravelled the story of the site, until the goodies themselves were put on display at in the spring of 2011. Some of the pieces are associated with a rare – and high status – ‘bed burial’, in which a female body was laid to rest on a wooden bed accompanied by gold jewellery. A gold pendant (said to be “unparalleled” in the Anglo-Saxon world), glass beads, pottery, iron knives, belt buckles (among other objects) formed the priceless core of the finds from a site which, in all, included over 100 grave plots.

After protracted debate (including mention in the House of Commons), a Heritage Lottery Fund grant of £274,000 helped the local authority/museum in their purchase of the treasure from the Crown, meaning that it could be retained in the region.