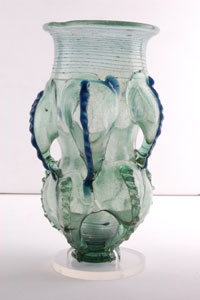 The Castle Eden Beaker, now housed at the , is a classic example of what is commonly known as a ‘claw beaker’ – for obvious reasons – and is a remarkable survival of the early years of Anglo-Saxon England.  This exquisite relic measures approximately 19cm in height by 9.5cm in diameter.

Dated to the late 5th century AD and of Frankish origin, it was unearthed under a hedge near to , Castle Eden, a little to the south of Peterlee, in 1775.  The area, at the time being worked upon by local landowner, Rowland Burdon (the church had been built only a few years previously), was found by a humble estate worker.  The base of the item was protruding out of the ground when found.

The piece must have been imported in the decades after the Roman legions left these shores – perhaps as a possession of its migrant continental owner – and was carefully buried as the sole grave good alongside its human partner as part of an elaborate ceremony.  It must have been a highly treasured possession.

The item is made of pale greenish-blue glass with blue trails.  Both body and claws are all ‘blown’, with the latter having been applied to the cooled body as a lump of glass which was then blown into shape through the wall, drawn out and reattached to the body.  After its discovery, it was passed down through various families and individuals, until it arrived, still intact, at the in 1947.

It is the only one of its kind to be found in .