The town now known as Whitley Bay seems as embedded in the popular culture of the North-East as any other place you care to name. It is as utterly distinctive to us locals for what it is and what is once was as anything else in the region’s rich history. And the splendidly named and beautifully formed landmark that is the Spanish City dome is unmistakable.
But the town’s name hasn’t always been as instantly recognisable. The name ‘Whitley’ goes way back, coming from the Old English wyt-leah, meaning ‘white meadow or pasture’; but it was for many centuries known simply as Whitley, and was a tiny place by today’s standards. In the Victorian era, however, it seems to have been known as Whitley-by-the-Sea, so as to distinguish it from Whitley Chapel and Whitley Castle in Northumberland. Then, in around 1902, the seldom used ‘by-the-Sea’ bit was dropped and replaced with ‘Bay’, allegedly to avoid confusion with Whitby in Yorkshire.
But wherever did the ‘Spanish City’ come from?
The answer is remarkably simple. In 1904, a merry band of entertainers known as the Toreadors Concert Party entertained visitors in an open-air theatre in Whitley Park. They had been brought there not from Spain, but from a few miles down the road by Mr Charles Elderton, who ran Hebburn’s Theatre Royal. For the occasion, the area was decorated in the Spanish style, and it became known as ‘the Spanish City’. It grew to be so popular that within a few years The Whitley Pleasure Gardens Company Ltd. was formed and a large fairground was established on the site. By 1910 the famous Dome was complete – in the Moorish style – and a legend was born. 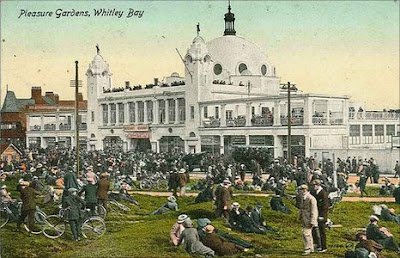